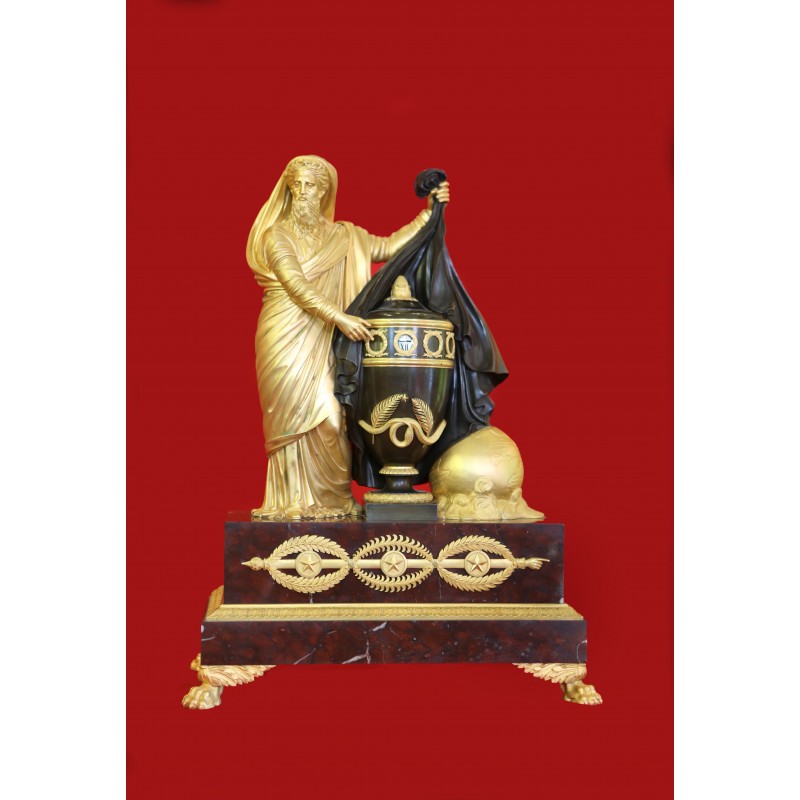 Empire period clock with rotating circle representing Chronos discovering "time". The Earth represents the 24 hours of the Earth's cycle and the snake biting its tail called "ouroboros" in antiquity is a very ancient symbol dating from the sixteenth century BC to the eighteenth Egyptian dynasty. The snake biting its tail naturally comes to symbolize the cycle of time and eternity. The movement and mechanism is of a very high quality and complexity. I took pictures during its restoration. The weight of this clock is 50kg. After intense research, we have not found this clock anywhere else, and we deduce that it may be a single order. At the beginning of the 19 th century, certain important people wanted to have a unique piece that one was not going to be found at the neighbour's house. The rotating dial mechanism specially made for this clock is signed on the front plate "Pons". Honoré Pons was a clock manufacturer installed in Saint-Nicolas - d 'Aliermont then saw his success, came to Paris rue de la Huchette to practice his watchmaking profession. Biography : Shortly after his birth, his parents moved to Grenoble. Honoré Pons continues his studies in Paris with the Jesuits and returns to apprenticeship at Antide Janvier. In 1798, he worked as a clockmaker at the prestigious Lepaute. In 1803 he moved to the Rue de la Huchette in Paris, not far from the Place Saint-Michel where the great watchmakers worked as Berthoud, Bréguet or Lépine. Honoré Pons came to settle in Saint-Nicolas-d'Aliermont in 1807, missioned by the authorities of the state; prefect of Seine-inferior and Minister of the interior of Napoleon, he receives several gold and silver medals. In 1819, he was distinguished by the Legion of Honor. An important collection of mechanisms signed by Honoré Pons is kept at the Museum of Arts and Crafts in Paris. For some reason, in my opinion it is for esthetic purpose, that he hid the keys entrances behind the palm leaves, the setting of the hour behind the star and the advance and the delay in the molding.