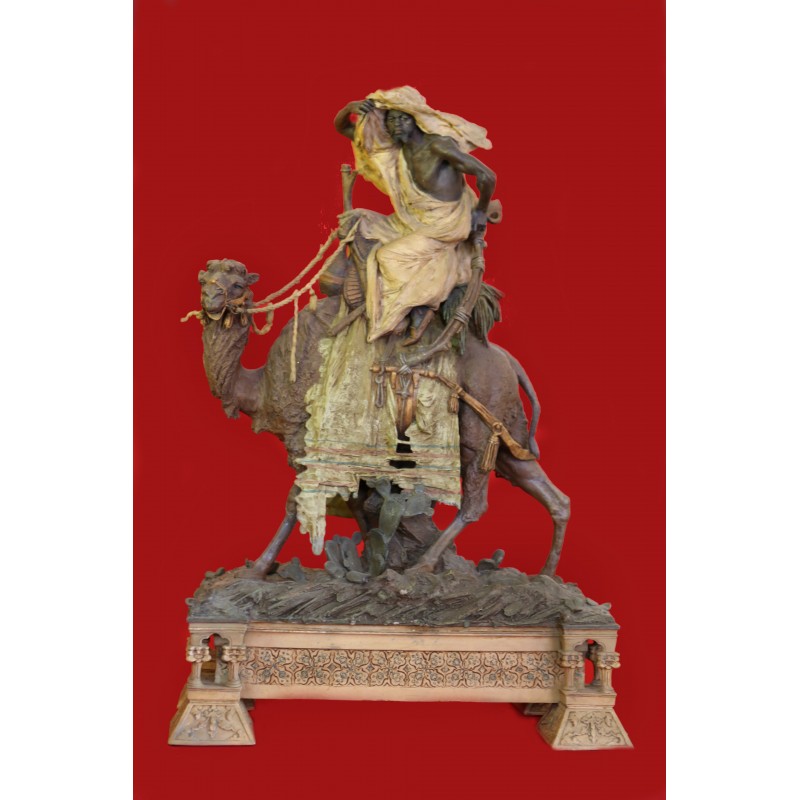 The messenger of the desert, polychrome terracotta, signs E. Stellmacher. Height 75 cm. Sale of Islamic Art. The ceramist Alfred Stellmacher was born in Thuringia in 1837 and died at Turn in 1906. He first created a small factory in Schnow, near Prague, where he had the privilege of producing porcelain flowers. He was awarded a gold medal at the Universal Exhibition in Paris in 1889. He donated part of his business to his son Edouard, born in 1868 a sculptor, Hans Riessner, painter and his brother Karl and Josef Kessel. They participated in 1893 at the Universal Exhibition of Chicago. A year later, their participation in the San Francisco exhibition earned them a gold medal. In 1894, the factory had 250 employees and stores in Paris and Berlin: it took the name "Riessner, Stellmacher and Kessel". Edward Stellmacher nevertheless left his associates in August 1904 and founded his own business at Turn, near Tepice, Edouard Stellmacher and Co. In 1907 the company had 360 employees and 12 furnaces. The affair of Edouard Stellmacher had a relatively short life. All of his achievements, mainly for the German market, were carried out under his control. The factory was represented in Vienna, Cologne, Leipzig and Berlin.